Officers responded at 4:42 p.m. to a car crash and grass fire reported at 309 E. 1825 North, according to a news release from the Centerville Police Department.

Police say Benjamin Young Wright, of Centerville, had been traveling east on 1825 North when the silver Acura he was driving crossed into the westbound travel lane and onto the sidewalk.

The Acura narrowly missed hitting two Centerville residents but ran over the groceries they were unloading from their vehicle, police said.

“The two homeowners reported that they believed Wight intentionally swerved at them and tried to run them over,” the release states.

The Acura then plowed into a mailbox and sideswiped a truck before again crossing the roadway and crashing into an electrical box, according to police.

“Officers found a silver Acura about 20 feet off the roadway, up in the brush of the mountainside with a fire burning around it,” the release states.

Police say Wight attempted to leave the scene of the accident, but the Acura was stuck. He also told police that he stole compressed air from Walmart and inhaled it just prior to the crash, according to the news release.

Police say the hot engine from the Acura sparked the fire. Neighbors and and first responders were able to extinguish the fire before it could spread up the mountain, police said.

Wight was arrested for investigation of driving under the influence, abuse of psychotoxic chemicals, reckless driving and attempting to leave the scene of an accident. An investigation into whether Wight intentionally swerved at the homeowners is ongoing, police said.

The crash occurred near the burned remains of the home at 329 E. 1825 North, where police say Ammon Jacob Woodhead, 37, intentionally started a fire in an attempt to kill the occupants. Police say the two incidents are unrelated. 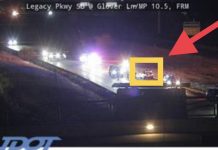 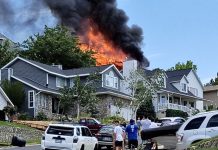 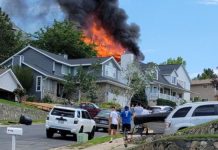